Located among the hills to the west of California’s San Fernando Valley and nestled in the Santa Monica Mountains in the northwest, Calabasas is a city that belongs to Los Angeles County. It is historic for the region, boasting the 1844 Leonis Adobe in Calabasas’ Old Town. This remains among the oldest of the greater Los Angeles’ surviving buildings. Though the city only became formally incorporated back in 1991, by the 2010 census, its population had reached 23,058, an increase from 2000’s 20,033 inhabitants.
Pest control for termites takes different forms and methods. Termite control companies determine which one to use based on certain factors. For instance, the size of your property will determine treatment method to be utilized to get the most effective result.

The following are some of the most popular pest control for termites methods:

Bait system is effective in situations where there are signs of termite activity as a prevention and control method. It involves setting up monitoring station around the property to confirm termite presence. Detecting termite activity is the first step because of this we recommend a free termite inspection. Foraging termites feed on the slow-acting toxin and then transport it back to their colony for other termites.

It is very easy to install, unlike using a liquid termiticide. You can get cheap do-it-yourself bait system kits at your local store.
Bait systems are eco-friendly. They use very small amount of chemicals. In fact, the initial monitoring stations don’t require any chemicals at all. You can baits in places where the use of a chemical isn’t available.

It doesn’t work. It takes some time to stop an infestation using the bait system since a slow acting kill on contact toxin is used. Damage from infestation may continue for a couple of years before seeing the results.
It requires constant monitoring to be effective. This is because it has no residual effect. When a new termite activity is detected in another location you need to initiate the treatment again.

Use of Liquid Chemical as Pest Control for Termites 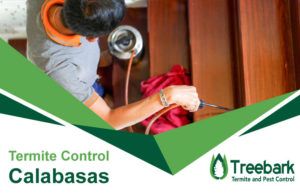 This involves the use of chemicals called termiticides on the soils across the perimeter of your property. Application of liquid termiticide will control an existing termite population and protect against future infestation.

Not everybody is open to the idea of using chemicals in the home, especially when you have kids and pets because of this there are much safer and environmental friendly termiticides in the market today. 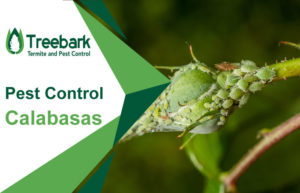 This is especially recommended for drywood termite infestation in the house. It allows treatment to reach difficult area that cannot be reached by other methods.

It penetrates cracks and wall to reach termites
The fumigant is non-flammable.
The kind of gas used evaporates quickly after the tent is removed, leaving no residue

Kills people. Will get you robbed. Fails and has to be redone, causes roof damage. Most of the gases used for termite fumigation can be lethal. Leaving the building for 3 days is standard procedure.
At high temperature some fumigation gas can disintegrate and form corrosive acid, all heat sources in the house must be turned off. The fire department comes to certify that the house’s natural gas has been turned off.

There are many methods of pest control for termites but the ones outlined here are some of the most common. We use our Treebark Final system which is a blend of control and prevention.

The History of Calabasas

There is a legend of the area and squash here dating back to 1824. It states that at the peak of the Calabasas grade along the original El Camino Real, a Basque rancher coming from Oxnard dropped his wagon load of pumpkins along the way to Los Angeles. By the next spring, hundreds of pumpkins had sprouted along the road here. This particular area later gained the name Las Calabasas. It means the place where pumpkins fell.

Because of this origin theory, the town still honors the pumpkin to this day each year. They team up with the Calabasas Chamber of Commerce annually to host the October Pumpkin Festival. This historic event includes exhibits, carnival games, live entertainment, and a range of demonstrations. Once a smaller town fair, today’s annual Pumpkin Festival is a major yearly event. 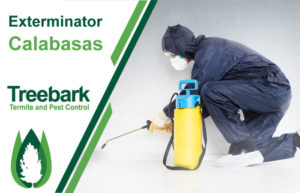 The city lies within the San Fernando Valley. The distance to downtown Los Angeles is only 22 miles. Running through the town in the current form of the Ventura Freeway (or US 101) is the historic old El Camino Real.

The U.S. Census Bureau states that Calabasas possesses an area amounting to 13.0 square miles. 12.9 square miles of land. Among the oldest areas in the city is Park Moderne. This was once a colony of artists. Today you can see the remains of the cabins, pool, and club house around streets that have bird names like Blackbird, Meadow Lark, Hummingbird, and Bluebird.

In ten years time from 2000 to 2010, the population of Calabasas expanded by a significant 15.1 percent to reach 23,058 by year 2010. The United States Census declared that the density of the town was 1,780.4 people for every square mile. At time of the census, the ethnic composition of the town proved to be 83.9 percent white, 8.6 percent Asian, 6.4 percent Latinos, 1.6 percent African Americans.

The town possessed 8,878 housing units which average a density of 685.5 per square mile.

The median household income was high at $124,583. About 6.6 percent of the total population lived under the federally defined poverty line.

Calabasas was famous as a regional technology center from the time of the dot-com bubble.  Among the companies here were a few computer networking firms. The area is still substantial in technology firms. A few of the companies have relocated or gone out of business.

Arts and Culture in Calabasas

Treebark Termite and Pest Control Calabasas is the sponsor of local events. We are outstanding pillars of our community and definitely perform the best pest control in Calabasas.

There are a few local draws that bring in tourists to Calabasas. The Leonis Adobe housed the Claretian Order of the Catholic Church from the early 1900’s. This Claretville property along with the King Gillete Ranch makes up a portion of the Malibu Creek State Park today. The unincorporated part of Calabasas.

The renowned Hindu Temple is in the unincorporated part of town.  Hindus and tourists from beyond the state borders come to visit it. The property hosts the Hindu Temple Society of Southern California since its inauguration back in 1977. There are plenty of things to see and do in Calabasas. I would recommend going to a restaurant or a movie downtown. Anywhere away from termites or pests!